Before we get into the length and breadth of telescopes, let’s delve into the field of science that forms the core of these instruments – Optics.

Many of you might have studied this science in high school and/or higher studies like me. Many might also need some brushing up of memory, again just like me. In addition, there are certain additional concepts that are important to a telescope and its elements which we might not have come across or probably even dozed off in the classes teaching those. I found it extremely helpful, refreshing my memory, in order to choose a good telescope and then tackle its nitty-gritty. Don’t worry even if you never paid attention in your Physics class, as long as you had one and are at least well-versed with the basic principles of mathematics. I will try my best to keep it simple and cater to all kinds of astronomy enthusiasts, touching, primarily, the concepts rudimentary to telescopes. Obviously, an encyclopedia like Wikipedia can illustrate all of this in much more detail, but I would like to handpick only the concepts I feel would be most relevant here. If you are not interested in learning these concepts, you can, of course, consult an expert at a local astronomy club or a telescope dealer in order to buy your first telescope.

So, what is this science of optics, anyways?

Optics is the branch of physics which involves the behavior and properties of light, including its interactions with matter and the construction of instruments that use or detect it.[1]

Optics can be classified into two main branches:

This branch constitutes of the basic and most widely used principles of optics, including what is most relevant to our area of interest here. As the name suggests, this branch refers mostly to the principles and concepts predating the modern era. This domain is discussed in detail below.

This area of optical science primarily relates to the electromagnetic or quantum properties of light.[2] I would exclude this area from further explanation to keep this post simple and limited in scope. In short, this domain mainly refers to the concepts like lasers, evolving mostly in the 20th century.

Geometrical optics (popularly known as ray optics) is the science that  describes the propagation of light in terms of “rays” which travel in straight lines, and whose paths are governed by the laws of reflection and refraction at interfaces between different media.[3]

“When a ray of light hits the boundary between two transparent materials, it is divided into a reflected and a refracted ray.”

Let’s first see what “reflected” and “refracted” mean and then we can jump back to understanding this law.

Reflection is the change in direction of a wavefront (for simplicity, just “light ray“,  for the purpose of this post) at an interface between two different media (through which the ray travels) so that the wavefront (ray) returns into the medium from which it originated.[4]

I am sure the term “reflection” actually does not need much explanation to many of you. However, there is more to it than meets the eye. Reflection can be categorized as Specular Reflection (just like in mirrors, reflection of a light ray at just one angle) or Diffuse Reflection (a surface like plaster reflects a light ray diffusely in multiple directions). Further details are beyond the scope of this post.

Refraction is the change in direction of propagation of a ray due to a change in its transmission medium.[5]

In layman’s terms, we can think of refraction as bending of a ray at the interface of two media of different optical densities (let’s just say different materials).

where c is the speed of light in vacuum and v is the phase velocity (let’s just say speed, for simplicity) of light in the medium. For example, the refractive index of water is 1.333, meaning that light travels 1.333 times faster in a vacuum than it does in water. 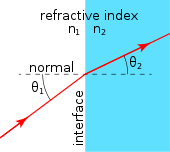 The refractive index determines how much light is bent, or refracted, when entering a material.

Now coming back to the law of geometrical optics, mentioned above. As can be seen in the image below, a ray incident on the interface of the two media of different optical densities (white on the left and blue on the right), directed from the left, splits into two rays, one that reflects in the same medium at the same angle and the other that refracts (bends) in the other medium at a different angle.

Physical optics (or wave optics) is the branch of optics which studies interference, diffraction, polarization, and other phenomena for which the ray approximation of geometric optics is not valid.[6] Although the details of this science can be left out from the discussion here, there are certain definitions that will come in handy to understand certain concepts later.

Wave – A wave is an oscillation accompanied by a transfer of energy that travels through space or mass.[7]  Let’s just think of it simply as an oscillation that carries energy in its path. Light is a wave.

Sine wave – Sine wave or sinusoid is a mathematical curve that describes a smooth repetitive oscillation.[8] And, light is a sine wave.

Ray – In optics, a ray is an idealized model of light, obtained by choosing a line that is perpendicular to the wavefronts of the actual light, and that points in the direction of energy flow.[9]  For the sake of simplicity, let’ just say “ray is a light wave”.

Wavelength – The wavelength of a sine wave is the spatial period of the wave—the distance over which the wave’s shape (crest and trough) repeats, and the inverse of the spatial frequency.[11]

Electromagnetic spectrum – It is the range of all possible frequencies of electromagnetic radiation (let’s just say electrically charged waves, like light). Here is the chart showing the spectrum.[12] Not all radiation bands are relevant here except the “visible” one. The visible spectrum is what you see when light is incident on a prism. You also see this spectrum in a rainbow (VIBGYOR).

Diffraction – It refers to various phenomena which occur when a wave encounters an obstacle or a slit. It is defined as the bending of light around the corners of an obstacle or aperture into the region of geometrical shadow of the obstacle.

Don’t panic if the above terms seem overly complicated. You don’t really need to master everything to understand the fundamentals of telescopes. I mentioned these here just so that you don’t scratch your head if you see these terms in the further sections.

Light – Yes, you read that right. I said “light“! Does it need to be defined? Yes, read the following and you will agree that it was meant to be. Light is basically an electromagnetic radiation within a certain portion of the electromagnetic spectrum (as seen before, the “visible” portion of the spectrum). The term “light” usually refers to visible light, which is visible to the human eye and is responsible for the sense of sight. Visible light is usually defined as having wavelengths in the range of 400–700 nanometers (nm), between the infrared (with longer wavelengths) and the ultraviolet (with shorter wavelengths).[13] The technical explanation might come in handy while studying optical filters.

That should be a good basic foundation on which we can build our understanding of the remaining rudiments of telescopes. See the next part of this series, Optical Elements, to read about the basic optical elements, especially the ones used in telescopes.